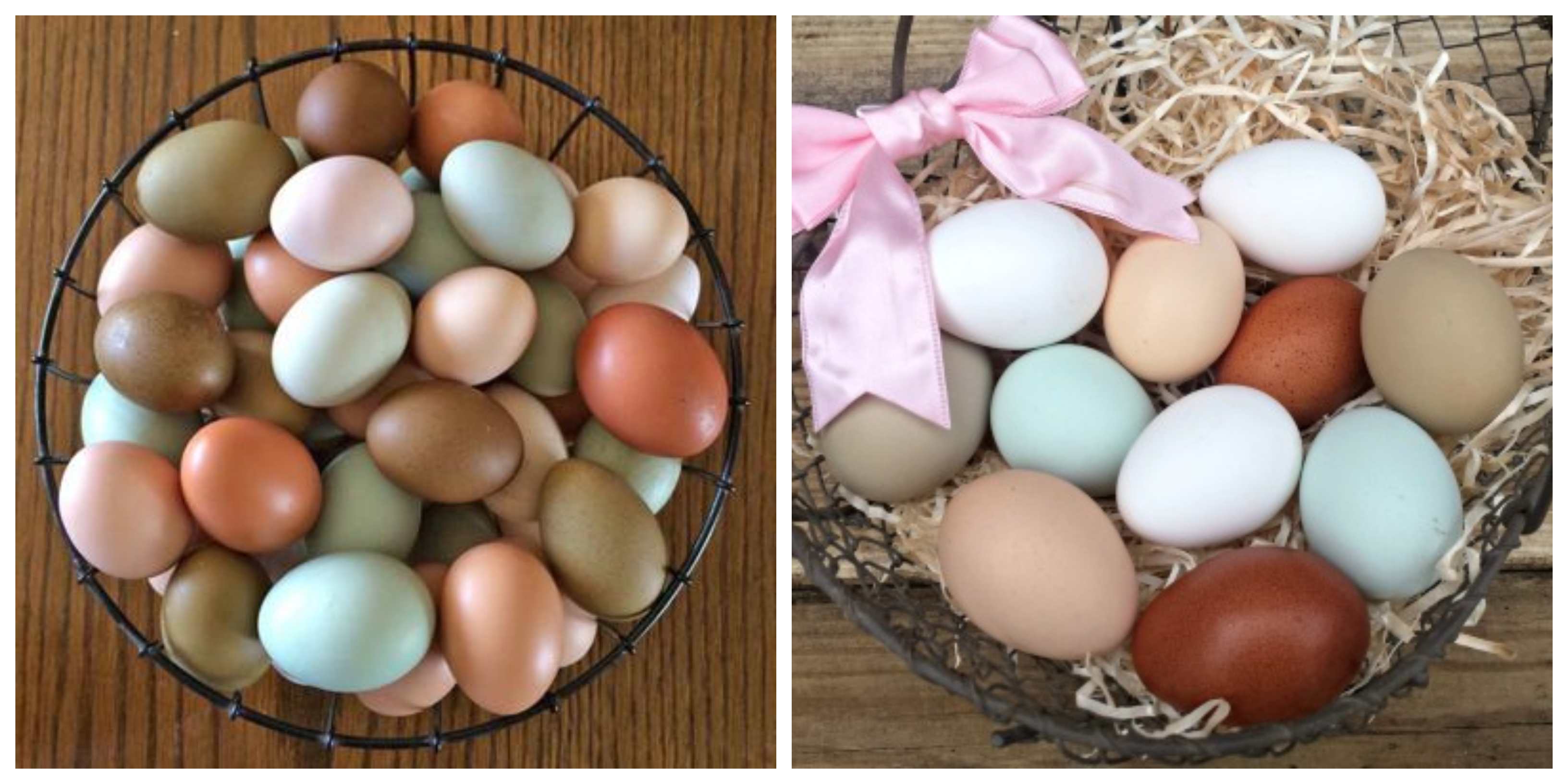 According to a study done by the Michigan State University Extension, the color of an egg is determined by the hen's genes. Different breeds of chicken will definitely show what shade eggs she will lay. For example, the breed of chicken known as the Leghorn lay white eggs while the breed Orpington lay brown eggs, and the Ameraucana create blue eggs. There is a breed of chickens knwon as the Olive Egger. These Olive Eggers lay olive green eggs. They were bred from the cross between a rooster and hen who had genes of a brown egg layer and a blue egg layer.

How eggshells get their color?

Every single egg start out as a shade of white; those that get laid in other colors apart from white get their color from pigments they attract while they were passing through a hen's oviduct. An egg takes 26 hours to pass through a hen's ovuduct. The shell however takes about 20 hours to fully develop.

Hens that lay brown colored eggs transfer the pigment known as protoporphyrin on the eggs late in the process of developing the eggshell. For that reason, the pigment does not pass through the interior of the egg and only the surface of the egg. This is why brown eggs are white on the inside. The chickens known as Ameraucana gets the pigment known as oocyanin treansferred onto the egg while it passes through the oviduct. The oocyanin pignent passes through the shell and colors the interior a shade of blue just like the exterior.

WHAT ARE THE DIFFERENT TYPES OF EGGSHELL SHADES?

While brown and white eggs may be the most popular in grocery stores, there are other egg colors that hens can lay, which include:

This is the second most popular eggshell color in America. As a matter of fact, New Englanders prefer brown eggs over the white ones. However, they aren't any different than white eggs when it comes down to nutrition and taste. During the 3rd stage of the egg-laying process, a brownish pigment is transferred to the eggshell. This coloring isn't allowed to travel through the shell though so the inside remains white. Remember that all eggs start off as being white. Some brown eggs may have a shade of orange which is only due to shade intensity. The age, type, and the anxiety levels of a hen will impact the depth and tone of the egg's color. For example, a young hen might lay darker eggs than a hen that is more mature.

What is a blue egg? This is not a Easter Egg creation! The blue colored eggshell is slowly becoming more popular nowadays. opposite to the process of creating a brown egg, a blue egg gets its color early in the egg-forming procedure. This means that when the pigment is allowed to reach the egg in the early stage, the inside of the egg also turns blue. A blue egg will also have blue throughout.

Why do we prefer brown or white eggs?

With all the different types of eggs available, why do a lot of us only eat white or brownish eggs? The reason is that white and brown eggs will more than likely cost less than blue eggs. White or brown eggs are much easier to get as well as normally originated from poultries that are known as good egg layers. And also, they have actually ended up being a part of our kitchen.

Where did chicken domestication originate?

Chickens have always been a very essential part of our existence. From humans in the ancient times, all the way to contemporary times, some chickens were used as sacred pets to some, while to others, they are an empty canvas for cooking. Their eggs are no no different. It is almost impossible to the exact or precise begin date of egg usage, however some clues point to the domestication of the wild fowl in around the year 3200 B.C. Historians also came to the agreement that the fowls were eaten at a higher rate than their eggs, as the eggs were made used to hatch new birds. Chinese and Egyptian records show that these birds were laying eggs for human beings sometime around the year 1400 B.C.

While when rare, this breed is making a comeback. Initially from Spain, these poultries lay tool to huge white eggs.

The eggs you purchase in your local grocery are most likely not from Catalanas, as they're rare to discover right here in the UNITED STATE. Their tool white eggs tend to have a creamy tint to them.

Like Catalanas, Lakenvelders aren't a type you'll discover in the UNITED STATE, though some individuals do maintain them. Lakenvelders hail from Germany as well as lay medium-sized white eggs.

The Anconas type, which originates from the Mediterranean, is known for its strength. It lays large white eggs that are best for a set of clambered eggs.

While known for being an outstanding egg layer, Minorcas are coming to be much less usual amongst farmers. These poultries, additionally called the "Red Faced Black Chicken" lay jumbo-sized white eggs.

Though they're called "Everlayers," Hamburg poultries lay smaller white eggs as well as have a tendency to be wayward, which makes them even more of a labor-intensive poultry. If you're questioning what breed lays your white eggs, it's a safe bet that they're Leghorns.

Isbar's might be the one pure-blooded chicken that lays green eggs. They were created in Sweden and lay differing shades of green eggs. In some rare cases with brown patches. Isbar's are a rare breed of chicken. These chickens are autosexing. Autosexing means that you will know which sex they are as soon as they hatch.

Easter Eggers, these type of chickens are not purebred. They are a cross of a brown egg layer with a blue egg layer. These types of chickens lay medium sized green eggs.

These types of chickens lay green eggs and are just plain old Easter Eggers. You can be create Favaucana's by mating faverolles and ameraucanas.

This type of chicken is also a kind of Easter Egger. Olive eggers lay dark green eggs. Olive Eggers are created when two chickens; one that lays dark brown eggs and one that lays a blue egg are crossbred.

This poultry was developed around the mid-1800s. They were first first put on exhibition in Boston in 1849. Plymouth Rocks lay large brownish eggs, plus they're sturdy in chillier weather.

Stemmed from England, this is a favored brownish egg-laying chicken. These hens lay about 180 brown eggs a year. An independent personality and low-maintenance is an atrraction to farmers and also hobby farmers who enjoy these tough birds.

These chickens lay very dark brown eggs. The French Marans are originally from France. It is rare to find them in the USA. They do not lay lots of eggs as most other breeds, but the color of their eggs are a thing of wonder. These eggs can range from a copper shade to an abundant, dark brownish.

Australorps are similar to Lover Orpingtons, as they're both loved for their egg laying capabilities. These chickens lay around five huge, brownish eggs every week. They're also very sturdy birds and do well in chilly weather, which means they can call almost any farm across the U.S. home.

These types of rabbits lay only a little bit less than the Australorps. They are a trustworthy breed as they're a cross between Prevented Rocks and also New Hampshire Reds. Their eggs are big and perfect for an omelet.

The Brahmas have feathered feet and lay medium-sized eggs. They are a favorite of homesteaders and also hobby farmers. The Brahmas originated in India and are known for their calm nature.

There are only three blue egg laying chickens in the world. These three chickens are the Araucana, the Ameraucana and also the Easter Egger. These chickens are typically only bred for the objective of marketing the phenomenal and pricey eggs. These eggs sell for a premium due to their elegance but additionally because these chickens do not generate the volume of eggs that regular chickens do.

This type of chicken was bred in the 1970s by breeders who wished to introduce them to the meat industry, as well as for their beautiful eggs. While it looks like the Araucana, with all the feathering mostly around the ears and face, there is a major difference in that the Ameraucana does have a tail. There are 8 different color variations for this bird. You can also find them in miniature form which people have been turning into pets more often recently. These miniature Ameraucana chickens are known as bantam.

Easter Eggers are not an actual type of chicken. Their name comes only from their capability to create colored eggs, which consists of blue. An Easter Egger chicken might come from the Araucana or Ameraucana supply chain, however does not satisfy the criteria to be labelled as one of those breeds. A hen of any type of breed that mates with a Araucana or Ameraucana will create offspring that will certainly lay blue eggs.

Technically speaking, there is no type of chicken known as an "Americana". The punctuation of the name Americana is a derivation of the americauna breed.

No, the nutritional value of all eggs are the same. It does not maytter which color they are, you will get roughly the same amount of benefits from any type of egg you choose.

What are the benefits of eating eggs?

Eggs are a very good source of nutrition that's perfect for breakfast, lunch, and dinner.

Should you throw away eggshells?

There are many different things you can do with egg shells. Eggshells have become very popular amongst hobbyist recently. Do not just throw them in the garbage or in the garden. If you have any type of eggs in your household you can reuse them for just about any little projects you have.

Chickens will always need a steady supply of calcium in order to lay healthy eggs. Eggshells are a perfect source of calcium as well as small amounts of potassium, salt and some magnesium.

How to mix eggshells for your chicken Conclusion